Pier Street
One of the most vibrant places to visit in Campbell River is the historic Pier Street area. Located along the downtown waterfront of Discovery Passage, it offers a fun, hustle bustle atmosphere, especially in summer months. 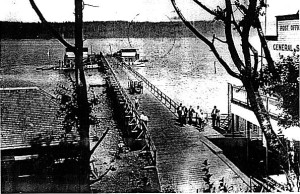 Pier Street, which extends from the Museum at Campbell River to the tip of Ostler Park, is the birthplace of the town of Campbell River. It includes such historical locations as the third Willows Hotel, built in 1901 by Frederick and Charles Thulin (now the site of the Bargain Shop), the former Courthouse, Police Station and Jail (later became Pier House B&B), and the Iaci Block (now the Foreshore Building). The first commercial wharf in Campbell River was located along Pier Street, and Union Steamships stopped there to load and unload freight and passengers. The first barbershop, the first general store, and the first café were also located along this stretch. 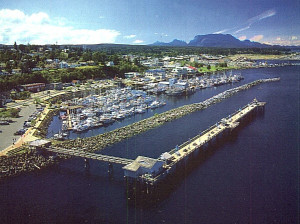 The Pier Street Farmers Market and Arts Fair is held every Sunday from the beginning of May to the end of September in front of the Maritime Heritage Centre. The market started in 2003 as an initiative of the Pier Street Association in the hopes that it would invite people to the area. That it did! The market quickly became a popular community affair; special event weekends often attract more than 4,000 visitors! It is not only the wide variety of homemade wares, arts and crafts, and fresh produce that bring the crowds, but also the enticing atmosphere, hot food and live music.

For several years members of the Pier Street Association have been working to improve the appearance of Pier Street, and their efforts have paid off. It is lovely to wander along the street on a warm, breezy day, enjoying the charming ambiance that marine murals, chainsaw carvings, flower barrels, and carefully placed bundles of driftwood pilings bring. There are plenty of interesting shops to browse through, and lots of places to stop and wet your whistle. Many community events are held in Ostler Park, or in other locations along Pier Street, so don’t miss out on festival days, when the area is packed with cheerful locals and delighted visitors.